Skip to content
HomeCommercial DriversSelf-Driving Cars: Get Used to the Thought of Them

Google Self-Driving Cars: On Their Way to a Road Near You! 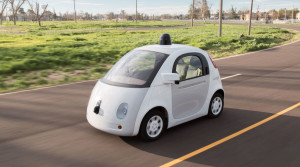 Ten million self-driving cars may be on the road by 2020, according to Business Insider.  (Self-driving cars are hereinafter referred to as SDCs in this blog entry.) If the concept of SDCs bothers you, relax. Cars with zero human control are still in their infancy and may never happen.

Texas Leads the Way – Sort of

Texas has not outlawed SDCs — YET. Ironically, Texas may be leading the way through its inaction. Austin’s reputation as a forward-thinking place is being bolstered by its welcome for being used as a testing site for SDCs.

For now, Google is experimenting in Austin, and the cars are not strictly self-driving. A live driver is behind the wheel, in case something goes awry. California required driver controls, but Texas hasn’t stepped in with the requirement just yet. Google wants SDCs to become standard and not even have driver controls like a steering wheel or pedals.  Meanwhile, Google obviously is eager to prove its brainchild can be safely used on real-life roads.

Not everyone is eager for fully automated cars. Some see it as robbing people of pleasure and control, as well as being potentially dangerous.

How far will Google go before someone steps in to outlaw or regulate SDCs here? How far will the Texas Legislature let it go before addressing the topic? Those who resist will surely be prominent, especially in a as state fiercely independent as Texas.

Laws to Address Self-Driving Cars Will be a Challenge

Current laws in Texas don’t neatly address what should happen when something goes wrong. Clearly, SOMETHING will go wrong, even with the best technology.   How much will go wrong? Who knows?

Automobiles generate litigation on a huge scale. A gigantic percentage of court cases are derived from automobile traffic. From the millions of pending traffic citations to DWI and other driving offenses in criminal courts to the car accident cases in civil court, courts are full of traffic-related cases.

Who Will be Responsible?  Who Could Suffer Unjustly?

If wealthier people can avoid traffic tickets by using SDCs, municipalities which depend upon revenues could target cars driven by humans. Poorer people would be disproportionately fined, even more than they already are.

You can be sure special interest groups will have a say in what laws will be made. Aside from those already mentioned, driving schools and driver safety course providers would be affected.

Questions for Regulatory and Criminal Control Over Drivers and Owners

Will a driver license be required from a passenger or owner of a SDC? If a SDC has no driver controls, what would be the point of training or licensure? Will a new class of license be created for SDC owners? If so, how can a license be fairly administered when the license holder has literally no control over how the car is driven?

If a SDC commits a traffic violation like speeding or failing to stop at a stop sign, what consequence will ensue? Will there be a fine? Who is responsible for paying it? What happens if the fine isn’t paid? Will a traffic violation appear on someone’s driver license? Will the SDC’s owner get fined? Should someone get fined for a computer glitch?

Will SDCs be required to self-report traffic violations, even provide digital evidence of the violation? What due process rights could the owner of a SDC have?

It defies reason to hold someone responsible for being intoxicated in a SDC. However, Texas’ DWI statute only requires a person to “operate” a motor vehicle while intoxicated to be convicted of DWI. I don’t put it past the Legislature to do what some other states have done and consider “possession” of a car to be enough to constitute DWI. Simply holding your car keys near your car may be legislated into the definition of operating. Google’s SDC requires the push of a button, so it is conceivable a person could be convicted for DWI in Texas by doing nothing more than pushing a button in a SDC.

Passengers are not all necessarily equal. Who can tell the car to start and/or stop? What condition must that person be in to make those limited choices? Must the person be sober? If a crash is imminent or driving conditions are dangerous, would the passenger-controller be responsible for a crash? The decision to start or not stop could be reckless. Would the SDC have the final decision? If so, will the decision be made by the SDC computer or a person in a remote location?

If someone dies from a crash with a SDC, how will fault be addressed? Can someone be charged with a crime? If so, who? The manufacturer of the car? The computer programmer? The hardware provider? The owner of the car? The passenger? Who will be liable for money damages?

Will accidents involving a SDC and a human driver have different rules of liability? Will there be a presumption in favor of the SDC or the human?

Legal and economic impacts of SDCs are sure to affect industries and institutions, so now would be a good time to put our minds to the future, which will be the topic of the next blog entry.